Oil is one of the world’s most widely traded and consumed commodities. Oil trading takes place across the world, as nearly all economies are reliant on oil to some extent.  Not only does oil provide the fuel for cars, trucks and other vehicles. Oil is also a raw material for many chemical and industrial processes and as such is almost indispensable to us.

What happens to the price of oil and in oil trading matters on a global scale. You can trade oil through TigerWit as a cash-settled CFD or Contract for Differences and we offer oil CFD contracts on both Brent and WTI crude oil.

How does oil trading work?

Oil is traded in barrels each barrel contains 42 gallons or 158.98 litres of oil. The term barrel dates back to the late 19th century when a wooden barrel containing 42 gallons of crude oil became the standard unit for transportation and trading purposes. These days of course oil is transported in giant oil tankers or through pipelines.

Oil is traded in barrels each barrel contains 42 gallons or 158.98 litres of oil. The term barrel dates back to the late 19th century when a wooden barrel containing 42 gallons of crude oil became the standard unit for transportation and trading purposes. These days of course oil is transported in giant oil tankers or through pipelines.

In oil trading markets each crude oil futures contract or lot, whether it’s west texas intermediate or brent, is over 1,000 barrels of oil. Crude oil futures are priced monthly and are deliverable. That is the buyer and seller make and take delivery of physical oil at the end of the contract’s lifetime.

Don’t worry though you won’t need an oil tanker to be able to trade in the oil markets, because if you trade oil using cash-settled CFDs there is no delivery of oil to worry about, as you pay or receive cash depending on how your oil trade has turned out.

When you trade CFDs on oil or other commodities you never own any oil, instead, you are speculating on the rise and fall of oil prices. Unlike oil futures trading, when you are trading oil CFDs you are not trading for a specific delivery month or date but instead, you trade a cash price that is derived from the futures prices for Brent and WTI.

Oil markets are global but just like all other commodities markets, oil prices are affected by changes in supply and demand.

On the supply side of the oil market, oil producers and consumers are often located at great distances from each other. For example, Mexico is an oil producer and China a large consumer of oil. Yet the two countries are 12,900 kilometres apart. So the costs and availability of transportation for crude oil are an important factor in establishing oil prices un the markets.

On the supply side of the oil market, oil producers and consumers are often located at great distances from each other. For example, Mexico is an oil producer and China a large consumer of oil. Yet the two countries are 12,900 kilometres apart. So the costs and availability of transportation for crude oil are an important factor in establishing oil prices un the markets.

Oil prices are also influenced by geopolitics and conflict particularly in relation to the Middle East, and by the actions of OPEC or the Organization of the Petroleum Exporting Countries and large volume oil producers such as Russia.

What time can you trade oil?

Crude oil is traded 24 hours a day five days per week with only short trading halts or breaks. Oil markets are becoming ever more active in Asia though the bulk of oil trading still takes place during European and US market hours. The ability to trade commodities like oil 24 hours a day means that our clients can react instantly to news flow and global events. without having to wait for exchanges to open. CFDs on oil are settled instantly with the appropriate credit or debit, once the contacts are closed and your account is immediately updated with your oil trading profit or loss.

CFDs are traded on leverage that is a client’s trading deposit is geared up or multiplied by their broker, allowing them to take a larger position in the market than their deposit would otherwise allow.  At US$30.00 per barrel, a standard lot of either WTI or Brent crude is worth US$30,000. However, with a leverage ratio of 10:1, you only need to have US$3,000 or ten percent of the contract value in your account. Of course, you don’t need to trade oil in whole lots either you trade in just a fraction of that size.

Not only do traders need to get the direction of their oil trading right, but they also need to size their trades appropriately. Crude oil has had a US$75.00 range over recent years and as a globally traded commodity crude oil prices are rarely static, which means there are always plenty of trading opportunities, in both directions long and short.

Can oil trading be high risk?

Remember when you trade oil you are trading the lifeblood of the global economy.

The world's energy markets are undergoing a transition as we become more aware of our impact on both the environment and the world’s climate and try to move towards a low-carbon future. Nonetheless, oil remains an important part of our energy mix, particularly where transportation is concerned. The chart below plots the global demand for crude oil between 2006 and 2019 in millions of barrels per day or MBPD, as we can see demand in 2019 reached just over 100 MBPD. 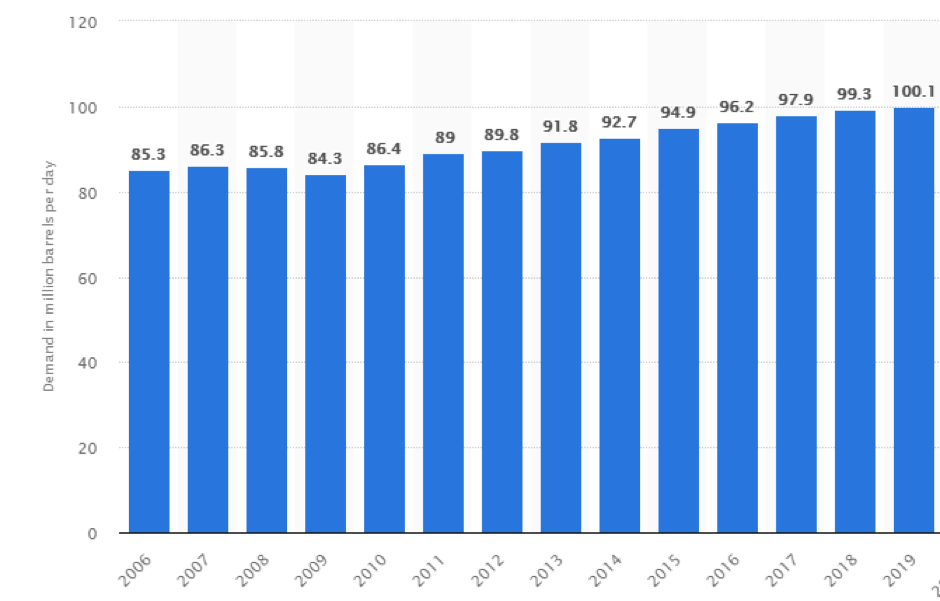 And whilst renewable energy sources, electric vehicles and alike are becoming more commonplace oil is likely to remain a key source of energy and raw materials for decades to come.

The events of 2020 impacted the global economy and oil prices felt the knock-on effects. Both WTI (West Texas Intermediate crude) and Brent crude oil prices experienced sharp falls and a subsequent rebound during the first half of 2020. In fact, at times during this period, crude oil was amongst the most volatile instruments in the financial markets. That volatility was driven by market sentiment and technical factors within physical crude oil markets particularly around the NYMEX or New York Mercantile Exchange where a large proportion of WTI crude oil is traded.

What other factors can influence crude oil prices?

Oil prices are influenced by a wide range of events but since the 1970s geopolitical events and conflict have been among the biggest influences on the price of crude oil.

OPEC or the Organization of the Petroleum Exporting Countries was formed in 1960 but rose to prominence in the 70s as member states took control of their domestic oil production and in 1973 OPEC enforced and Oil embargo against many western nations and by 1974 oil prices had risen by as much as +400%, firmly establishing OPEC’s credentials on the world stage. 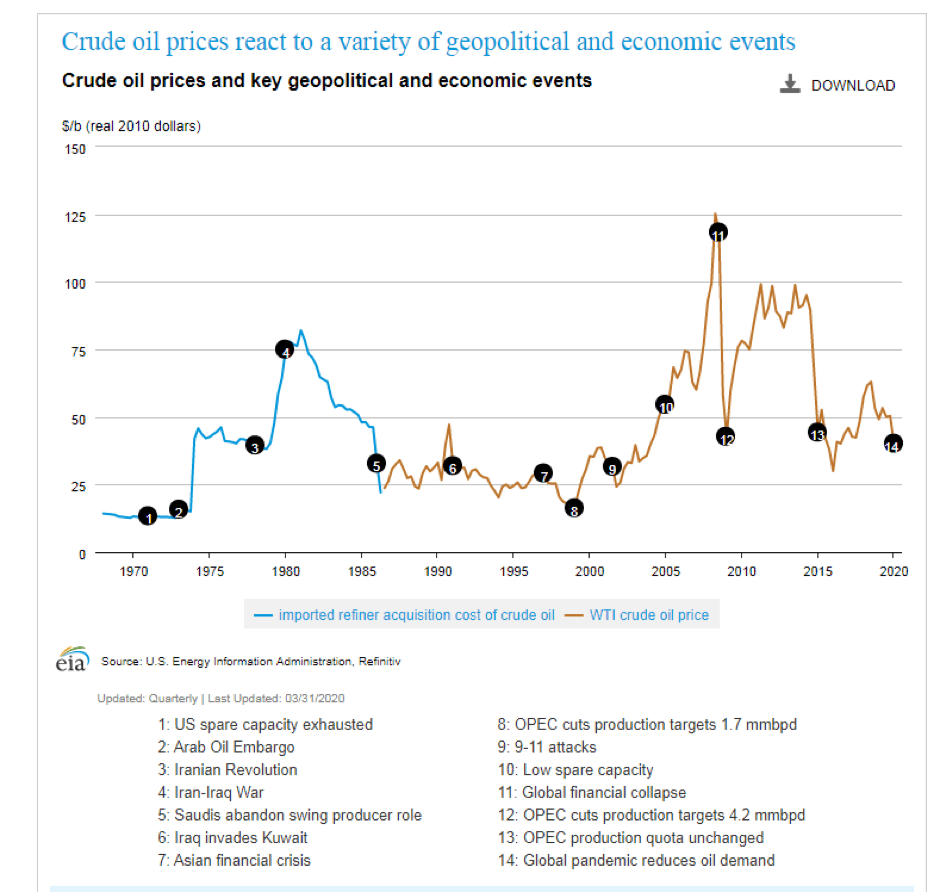 The chart above shows the price of crude oil in the 50 years between 1970 and 2020 highlighting some key events that affected prices. You can see that wars, other conflicts and production cuts have often limited supply and driven oil prices higher. Whilst market crashes and an over supplies of crude have typically caused oil prices to fall.

The events highlighted above are the most important on either a global or regional scale however oil prices remain sensitive to thousands of smaller influences as well.

Political influences on oil faded somewhat in the middle of the last decade but have reappeared more recently as China and America spar over trade deals and leading crude oil producers have made and then broken deals about levels of crude oil production. Government's stimulus packages and central bank intervention have now become influential as the world’s economies attempt to re-open after the Coronavirus.

Against this background, the oil market is likely to be subject to further volatility and are therefore likely to provide many opportunities for traders to consider whether to get involved in or not.

If you do decide to trade in the oil market then as we noted above you can trade both WTI and Brent crude, as well as Natural Gas, as cash-settled and non-deliverable CFDs.

These flexible contracts have no expiry dates and allow traders to hold positions open for as long or a short a period as they require. Though positions held open overnight will incur rollover or swap charges.

Trading oil through CFDs also allows you to take either long (buy ) or short (sell) positions with equal ease. Meaning that if you believe that oil prices are likely to fall you can simply sell short of Brent or WTI with a view to buying your position back or closing the trade at a lower price than you opened it at without needing to worry about delivery or settlement.

Of course, if you are bullish of oil prices,  that is you believe that they will rise in value then you might buy Brent crude or WTI CFDs now, in the expectation of selling out of, or closing those contracts at a higher price than your entry-level in the trade and realise a profit in doing so.

These days crude oil prices don’t always move together and there can be a divergence between the prices of WTI and Brent crudes, as a result, which opens up the possibility of spread trades between the two flavours of crude oil.

Spread trades are not so much about overall market direction but rather the relative performance between two or more instruments that have or share some kind commonality or bond. Under a spread trade, you consider whether the price difference between those instruments will narrow or widen and place your trades accordingly.

For example, if you believe that Brent has risen too quickly compared to WTI you might sell Brent and buy WTI in expectation of the differential between the two prices narrowing. Or if you took the view that European economies may rebound more quickly than those of the USA.

Then you might buy or go long Brent and sell WTI believing that the price differential will widen. These are just some of the oil trading possibilities for you to consider whether you pursue these types of trades is up to you, the end trader.

The good news for oil traders is that you can get to grips with the way oil prices move, the factors that influence them. And become familiar looking at their charts within our experience account. The experience account is a highly realistic simulation of live trading conditions but it’s one in which you don’t have to risk any real money.

You can take advantage of your time on the experience account to learn how to make trades place and or cancel pending orders implement stop losses and much more the time spent practising will allow you to formulate your strategy for trading the oil markets without worrying about losing real money of course once you have your strategy in place and you are feeling ready you can start trading one of the world’s most important commodities for real in one of its most active markets.